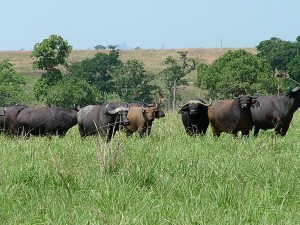 Preliminary evidence from an ongoing study by Rainforest Foundation UK(RFUK) suggest Congo Basin protected areas may not be contributing to improvements of livelihoods nor biodiversity as expected.

From a sample of 34 protected areas analyzed in the study, RFUK found the following:

The real impact of protected areas on local communities and conservation is an unsettled issue for conservation actors in the Central African region. Evidence from different sources has swayed discussions in different directions over the years.

But recently, there has been a near consensus to change the direction from the perspective of governance, management and financing. At the heart of this shift is an emphasis on engagement of local communities in the decision making process of their customary land.

“The conservation model of protected areas practiced almost universally in the Congo Basin is one of exclusion of people,” argues RFUK Simon Counsell. Pointing to the Tumba Lediima Reserve in the Democratic Republic of Congo (DRC), the RFUK Executive Director says efforts by ecoguards to suppress traditional livelihoods activities have resulted in multiple human right abuses.

“The Congo Basin forest is not a ‘wilderness’, the vast majority of it has long been occupied and is now claimed under comprehensive customary tenure systems.”

“Working with local communities can bring ‘win-win’ benefits, as they understand the forest and its fauna well and can provide real protection against intruders and commercial poachers if provided with the right incentives (including increased tenure security). Harassment or eviction by ecoguards, in the other hand, can cause long-term animosities and turn potential allies of conservation against it” concludes Counsell.

In June 2015, key stakeholders involved in the management of protected areas in Central Africa met in Yaoundé at the 5th iteration of protected areas Open Days where they broadly discuss sustainable solutions to manage and finance parks in Central Africa. This event held on the sidelines of the Congo Basin Forest Partnership (CBFP) conference, an initiative of major stakeholders managing the Basin.

It emerged that participation of local communities in the management of protected areas remains an unsettled issue.

Despite some successes recorded, the final report of the talks concludes that local communities still feel largely marginalized from day-to-day management. Parties including governments, civil society, and businesses called for greater clarity of roles and responsibilities of various actors in the management process.

From a quantitative perspective, the good news is that Congo Basin protected areas have actually experienced an overall increase in size in areas formally designated as protected parks. But this increase has not necessarily translated into improved conservation of biodiversity and protection of peoples’ livelihoods as desired.

RUFK research shows that most protected areas in the region seem to rather tolerate or accommodate more destructive activities such as industrial-scale logging or mining within or on their boundaries. “This is having demonstrable impacts on the region’s fauna. These are all indications that the current model of protected areas is failing,” argues Counsell.

Across the region, many have continued to argue that the present network of protected areas is not enough to meet local, regional and international biodiversity targets. And as a result, governments are encouraged to create more protected areas. But the reality here is that creation of parks in the Congo Basin has not always been matched with commensurate financial investment required for effective and efficient management.

For example, there was a call to create trust funds for protected areas as a complimentary source of funding to what is allocated by states. Additional suggestions included the creation of a steering committee including interested Ambassadors to promote protected areas projects at the sub regional and international levels as well as leveraging potential sources of funds such as compensations from mining activities and construction of major dams.

It is unclear if these sources proposed at the Yaoundé meeting are enough to handle increasing complex challenges of managing protected areas in Central Africa. While most actors would like to see local governments invest more in these parks, competing economic priorities especially the urgent need to lift populations out of excruciating poverty makes this even harder for the nations of the region.