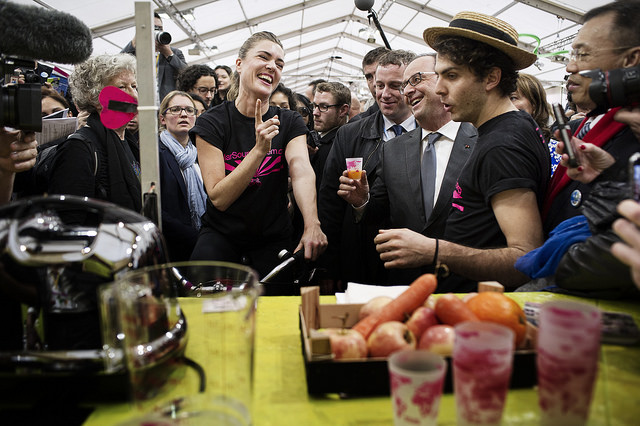 Paris, 1 December 2015 - Governments and food and agriculture organizations join today at the LPAA Focus on Agriculture to respond to the urgent climate challenges facing agriculture with six cooperative initiatives that will protect the long-term livelihoods of millions of farmer and reduce greenhouse gas emissions.

Agriculture is one of the sectors most seriously affected by extreme climate but it also accounts for 24 % of the greenhouse gas (GHG) emissions which cause climate change.

The initiatives focus on four key areas: soils in agriculture, the livestock sector, food losses and waste, and sustainable production methods and resilience of farmers.

Together, these partnerships will deploy money and know-how across both developed and developing nations to help hard-pressed farmers become key actors in the global drive to achieve a low-carbon, climate-resilient future.

This exceptional half-day reveals the effective and concrete progress that can be made when a wide, international set of stakeholders work together to build resilience and low-carbon systems of production in agricultural and food systems.

At the heart of the Action Agenda, the six major initiatives supporting farmers include:

The “4/1000 Initiative: Soils for Food Security and Climate”

Officially launched today by a hundred partners (developed and developing states, international organizations, private foundations, international funds, NGOs and farmers' organization) the 4/1000 Initiative aims to protect and increase carbon stocks in soils. Soils can store huge quantities of carbon and contributing to limitation of greenhouse gas concentration in the atmosphere, supplementing the necessary efforts to reduce greenhouse gas emissions globally and generally throughout the economy.The partners decided to reinforce their actions on appropriate soil management, recognizing the importance of soil health for the transition towards productive, highly resilient agriculture. This initiative intends to show that a small increase of 4/1000 per year of the soil carbon stock (agricultural soils, notably grasslands and pastures, and forest soils) is a major leverage in order to improve soil fertility, resilience of farmers and contribute to the long-term objective of keeping the global average temperature increase below 2 degrees.