Geneva, Switzerland, 8-13 February 2015  - At the eighth part of the second session of the Ad Hoc Working Group on the Durban Platform for Enhanced Action (ADP 2-8), delegates agreed on a text that will serve as the basis for negotiating a new climate change agreement. This new agreement is anticipated to be adopted at the Paris Climate Change Conference in December 2015. Over 1.300 Participants attended the Meeting. The Geneva conference was the first of several meetings in preparation for the Paris Climate Change Conference that will be held in France in December 2015. The Paris Conference is mandated to adopt  " a protocol, another legal instrument or an agreed outcome with legal force under the Convention applicatble to all Parties," which will ne implemented from 2020 onwards. The Body tasked with developing the Paris agreement is the Ad Hoc Working Group on the Durban Plateform for Enhanced Action (ADP). In Geneva, the ADP held the eighth part of its second session (ADP 2-8).

In December 2014, the 20th session of the Conference of the Parties (COP 201) to the UNFCCC requested the ADP to intensify its work, with a view to presenting a neogotiating text for a protocol, another legal instrument or an agreed outcome with legal force under the Convention applicable to all parties before May 2015. 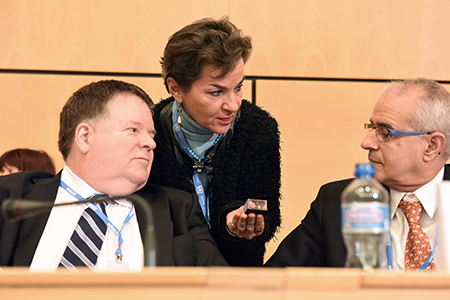 In their scenario note (ADP.2015.1.InformalNote), ADP Co-Chairs Ahmed Djoghlaf (Algeria) and Daniel Reifsnyder (US) identified the objective of the Geneva session as delivering the negotiating text. The ADP based its work towards a negotiating text on the elements for a draft negotiating text annexed to Decision 1/ CP.20 (Lima Call for Climate Action). The ADP contact group worked through the elements text section-by-section with parties proposing additions in places where they felt their views were not adequately reflected. Co-Chair Reifsnyder stressed that the main objective was to ensure that the text fully reflects parties’ positions. Making good progress, parties finished the first reading of the elements text on Tuesday. The revised text grew in length from 39 to 86 pages. Between Tuesday and Thursday, the Co-Chairs and many parties made proposals to start streamlining the text. Other parties called for more time to consider the revised text, indicating they were not ready to proceed with streamlining. By the end of the session, parties only submitted technical corrections to the Secretariat. A number of delegates expressed satisfaction with the progress made and the way in which the Co-Chairs had guided parties through the process of developing a negotiating text. Others indicated that they had hoped to make more progress and indicated that critical negotiating time had been lost. On Friday afternoon, the ADP closing plenary agreed that the text developed in Geneva will be the basis on which the ADP will start substantive negotiations towards the Paris agreement in June in Bonn. Co-Chair Reifsnyder emphasized that the ADP has fulfilled the request by COP 20 and the negotiating text will be formally communicated to parties ahead of schedule in March.