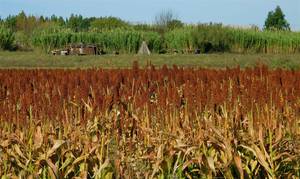 19 January 2015, Rome - Genetic resources have a critical role to play in feeding the world — especially as climate change advances faster than expected — and much more needs to be done to study, preserve and utilize the biological diversity that underpins world food production, according to a new book released by FAO today.

"Time is not on our side" warns the book, Coping with climate change: the roles of genetic resources for food and agriculture. "In the coming decades, millions of people whose livelihoods and food security depend on farming, aquaculture, fishing, forestry and livestock keeping are likely to face unprecedented climatic conditions."

Crops, livestock, forest trees and aquatic organisms capable of surviving and producing in a changing climate will be needed.

The ability of plants and animals raised by farmers to withstand volatile conditions and adapt when the environment changes is a direct result of their genetic diversity, but stronger efforts to study and use that diversity as a coping mechanism — and policies to support that — are required, the book argues.

"In a warmer world with harsher, more variable weather, plants and animals raised for food will need to have the biological capacity to adapt more quickly than ever before," said FAO Deputy Director-General Maria Helena Semedo.

"Preventing further losses of agricultural genetic resources and diverting more attention to studying them and their potential will boost humankind's ability to adapt to climate change," she added.

Such an adaptive approach will require updating the goals of agricultural breeding programmes — and in some cases introducing varieties, breeds, species, that have not been previously raised.

And improvements to field-based and off-site conservation programmes for domesticated species, their wild relatives and other wild genetic resources important for food and agriculture — along with policies that promote their sustainable use — are "urgently" needed.

Building our knowledge of genetic resources for food and agriculture - where they are found, what characteristics they have (e.g. resistance to drought or disease) and how they can best be managed is also critical, the book says.

In particular, improving knowledge, conservation and use of crop wild relatives is important — they are likely to have genetic traits that can be used to develop well-adapted crops for use in climate change-affected food systems.

"We need to strengthen the role of genetic resources and help farmers, fishers and foresters cope with climate change," says Linda Collette, lead editor of the volume and Secretary of FAO's Commission on Genetic Resources for Food and Agriculture, which starts its biennial meeting today.

Many locally adapted varieties and breeds of crops and livestock — as well as trees, fish, insects and micro-organisms — are poorly documented and may be lost before their potential roles in climate change adaptation are recognized.

Efforts should be made to avoid practices that destroy biodiversity or undermine the health of agricultural ecosystems — for instance the use of broad-spectrum insecticides that impact pollinators...