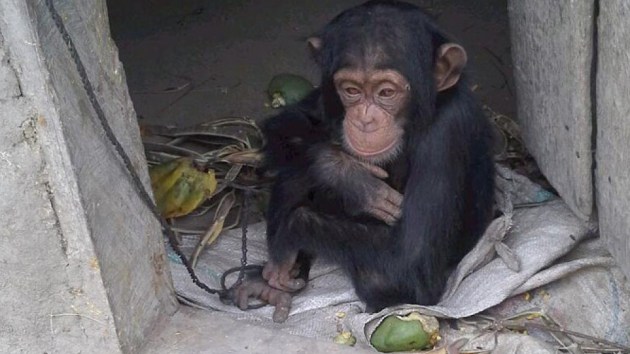 The Great Apes Survival Partnership (GRASP) welcomed the recent arrest of Guinea’s former wildlife director, who is believed to have played a key role in illegally exporting hundreds of chimpanzees and other endangered wildlife from the West African nation beginning in 2008.

Ansoumane Doumbouya, who also served as Guinea’s authority to the Convention on International Trade in Endangered Species (CITES), was arrested 21 August following a lengthy undercove! r investigation by the EAGLE Network, the Guinée-Application de la Loi ! Faunique (GALF) and INTERPOL’s National Central Bureau (NCB). If convicted, Doumbouya faces up to 10 years in prison.

“Ansoumane Doumbouya has been identified for years as central to the illicit traffic of apes from West Africa,” said GRASP coordinator Doug Cress. “To finally have him under arrest is a major achievement, and EAGLE, GALF and INTERPOL deserve full credit. No one knows exactly how many chimpanzees and other apes were victims of Doumbouya’s operations – there are indications he even exported gorillas and bonobos, which aren’t endemic to Guinea – but these latest developments are an important step forward for the Rule of Law.”

Doumbouya is being held in a prison cell in Conakry while investigators continued to amass evidence. When his briefcase was opened last week in front of the prosecutor, it was found to contain blank CITES export permits. Doumbouya is alleged to have issued ! fraudulent CITES permits through the years to export a wide range of wildlife, including manatees, parrots and monkeys.

The case against Doumbouya also resulted in the arrest of another alleged international trafficker, Thierno Barry, who is believed to have illegally exported protected species to Asia for years.

GRASP joined with a number of leading international agencies to send letters of support to Guinea’s justice and environmental ministers.

“This is a landmark in the fight against corruption and complicity facilitating the illegal wildlife trade”, said Charlotte Houpline, president of WARAs’ GALF project assisting the operation. “We are very pleased by the strong message of the Guinean government. The vicious cycle of impunity has been broken.”

A CITES mission to Guinea in 2011 found that 69 chimpanzees had left the country in 2010 alone, all destined for Chinese zoos or safari ! parks. Investigations led by NGOs and private individuals have revealed! that as many as 138 chimpanzees and 10 gorillas have been exported via travel routes established by Chinese development companies. Doumbouya’s signature was also found on fraudulent CITES permits that sent bonobos to Armenia in 2011.

Despite the mounting evidence, Doumbouya continued to attend international conferences and even rose to Guinea’s commander of the National Wildlife and Forestry Mobile Enforcement Brigade, the top agency to counter illegal wildlife trade.

“The issue of corruption and complicity in international conventions is pertinent and has to be tackled more seriously” said Ofir Drori, founding director of the EAGLE Network. “There are many more such criminals in suit and tie, not just in Africa, and we have our plans against a few.”

GALF Project was launched in Guinea in 2012 and works closely with the Ministry of Environment and Forestry (MEEF), the Ministry of State for Justice, ! the National Central Bureau of INTERPOL and other government agencies to establish and strengthen the enforcement of wildlife law. It is a part of the EAGLE Network. For more, visit: Here

The EAGLE (Eco Activists for Governance and Law Enforcement) Network unites agencies in eight African countries, who are following the same program and operational model to fight wildlife crime through investigations, arrests, prosecutions and publicity. For more, visit ww! w.eagle-enforcement.org