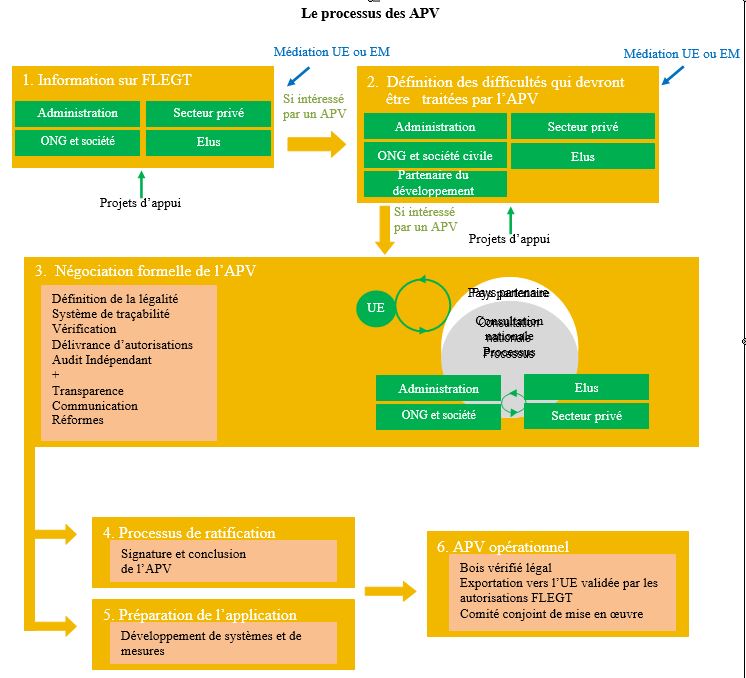 The Central African Forest Commission of (COMIFAC) and RAINFOREST ALLIANCE, its partner in the activities of the Central African Forest Governance Working Group (GTGF) and in implementation of the "Towards a harmonized regional approach to sustainable management of production forests in the Congo Basin” Project , capitalizing approaches adopted by the Congo Basin countries in negotiations, financing the process, ensuring stakeholder involvement, developing implementation tools and identifying factors for success, failure and challenges in the implementation of VPAs in Central Africa, with the aim of eventually producing a guide on negotiating and implementing VPAs within COMIFAC.

The Congo Basin is one of the main regions of concentration of the Voluntary Partnership Agreements (VPA) with the European Union. For over four years, three countries of the sub-region have signed VPAs with the European Union (Congo, Cameroon and Central African Republic), of which two are under negotiation (Gabon and Democratic Republic of Congo).

The VPAs contribute to the the fight against illegal logging, one of the essential elements of the 2003 European Union Plan of Action. They are bilateral trade agreements that bind timber producing countries to the European Union in order to improve forest governance in producing countries and also to ensure that timber products exported to the European market comply with all legal and regulatory requirements applicable in the forestry sector. Significant and diverse progress has been registered in the negotiation and implementation of the VPA process in the Congo Basin.

This includes a new and satisfactory participation of stakeholders in the process, the consensual definition of forestry legality, the proliferation and diversification of the promotion of forest governance institutions as well as an intense mobilization for the review/reform of forestry policies and laws of the countries involved in the VPA/FLEGT process. However, many problems remain amongst countries who have signed the Voluntary Partnership Agreements or countries that are negotiating them.

These problems are essentially based on the implementation of simplified national traceability systems, which are adapted and based on the countries’ realities, the inadequate testing of legality within countries, the absence of compilation, centralization and archiving systems for data and information produced under the VPA/FLEGT process, operational difficulties of national legal verification systems (LVS), the poor level of organization of domestic timber markets and their difficulties in satisfying the demands of VPA/FLEGT, the insufficiency of financial resources allocated to VPA/FLEGT activities in the countries, the lack of a clear and precise joint mechanism on the sustainable financing of VPA/FLEGT activities and the delay in reviewing forestry policies and legislations in countries engaged in VPA/FLEGT. The European Union and partner countries have to come together, remobilize themselves so as to solve these problems and initiate a new dynamism of negotiation and implementation of the VPA/FLEGT in the Congo Basin.