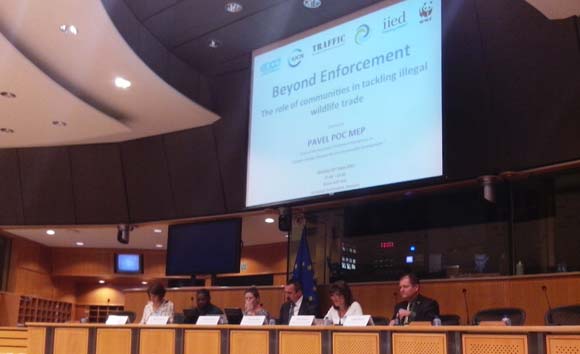 Brussels, Belgium, 25th June 2015—International experts have called upon EU decision-makers to acknowledge the pivotal role of communities in supporting wildlife conservation - including the combat against wildlife crime - in their forthcoming strategies and action plans.

Pavel Poc MEP and other European Parliamentarians from the MEPs for Wildlife group gathered on 22nd June in Brussels to discuss the Role of Communities in Tackling Illegal Wildlife Trade, an aspect that is not given enough attention compared to top-down approaches such as law enforcement and demand reduction for illegal products.

"Front line communities can be powerful and positive partners in combating wildlife crime—we need approaches that recognise their needs and build their support for conservation," said Rosie Cooney, Chair of the IUCN Sustainable Use and Livelihoods (SULi) Expert Group.

World experts met in February 2015 in South Africa to share experiences on involving communities to achieve success in combating illegal use and trade of wildlife. Some of these experts made the journey to the European Parliament to present successful case studies where local people have been involved in fighting wildlife crime.

Susan Canney of the Mali Elephant Project and Rodgers Lubilo from the Southern African Wildlife College highlighted case studies of combating wildlife crime that would not be possible without community engagement. Communities living alongside wildlife typically have the best knowledge about who is doing the poaching. When they are empowered and given a stewardship role, communities can be the "eyes and ears" of anti-poaching efforts, and work closely with armed authorities to manage the threat of illegal poaching and trade.

“Local people will protect wildlife if they own it and have access to it. In parts of Southern Africa, trophy hunting and distribution of the revenues of it is critical in changing attitudes to wildlife among local communities. Communities should retain 100% of the revenues and should be able to make their own choices. Wildlife, money and jobs go side by side,” said Rodgers Lubilo, who himself grew up in a rural village in Zambia and has first hand understanding of the pressures facing the communities who live with wildlife.

Kenya is losing its wildlife at 4% per annum and losing land for wildlife to agricultural expansion at the rate of 8% per annum, which means that there is no space for the wildlife in the future unless its values are recognised through approaches such as payments for ecosystem services, said Calvin Cottar of Kenya-based Cottar's Safaris, a leading ecotourism operator.

Poor communities are vulnerable to economic pressures, and there can be powerful incentives for people to engage in poaching or to provide food, information or accommodation to criminals. It is therefore crucial to help support the rights and responsibilities of communities for wildlife management, and to support ways for communities to benefit from conservation, such as through greater returns from tourism and trophy hunting.