CBFP and China – where do we stand?

New!!! Please download a French translation of the « Guide on sustainable overseas silviculture by Chinese Enterprise” –  The English version has already been published: Download: HERE

Kinshasa, September 26th, 2009 – The outgoing CBFP facilitator Hans Schipulle smiles at the number of CBFP partners who, in the context of the evaluation of the German facilitation phase (2008-2010), have falsely quoted China as one of the partnership’s last adherents, but prefers to clarify facts and figures right away: “It is true that the German facilitation has undertaken – in coordination with COMIFAC and other partners such as IFIA, EC, IUCN, WWF and CIFOR – great efforts to open up the CBFP platform for dialogue, and to include actors from China, in particular the Chinese National Forest Administration SFA. But China’s official adherence to CBFP has not really been discussed yet; neither should it be viewed as a stand-alone objective. We consider it much more important to use CBFP as an instrument for strengthening and consolidating relations between all types of stakeholders intervening in the Central African forest sector, and for supporting COMIFAC in becoming a strategic cooperation partner for China.”

So what’s the current status with regard to stronger relations between China and COMIFAC, and China and CBPF? China's growing global economic presence is a given fact, which can also be observed in the forestry sector of the central African region, particularly in countries which have a significant share of the tropical rainforest of the Congo Basin: Gabon, Cameroon, Republic of the Congo, the Democratic Republic of the Congo and the Central African Republic. Trading volumes are impressive: in 2006, China invested about USD 17 billion in timber imports; after processing, 70% of raw timber imports are re-exported. Approximately 10% of China's round timber imports now originate in Africa. Fluctuations are explained not by lower demand, but by temporary bans on round timber exports (as introduced in Gabon). Since the late 1990s Chinese timber companies have been running export-oriented concessions themselves, especially in Gabon and the Republic of the Congo. Today, 85% of all African timber exports consist of round timber logs for the Chinese market. 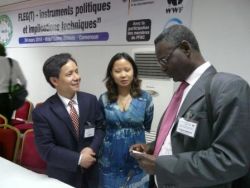 In view of this tangible presence, the Central African Forest Commission (COMIFAC) and the CBFP members are endeavouring to hold a constructive exchange of information with the "new actors". The CBFP’s objective is still to provide concerted support to COMIFAC in the implementation of the regional strategy adopted in 2005 (Plan de convergence) on the sustainable use and protection of the Congo Basin forests. Two chapters of the regional strategy are especially important for an understanding of the structure of the dialogue with China: first, the commitment of COMIFAC members to better governance in the forestry sector (inter alia, to combat illegal logging and reduce poverty) and, secondly, willingness to make better use of existing forest and non-forest resources.

All five COMIFAC member countries considered “forestry countries” are currently negotiating Voluntary Partnership Agreements (VPAs) with the European Commission under the EU Forest Law Enforcement, Governance and Trade (FLEGT) Action Plan (Cameroon and the Republic of the Congo: VPAs signed; Central African Republic has been negotiating since 2009, Gabon since March 2010 and the Democratic Republic of the Congo since October 2010). In the VPAs, the producer countries commit themselves to send only timber that can be proven to have been legally harvested to the EU or, as applicable, to other markets. In return, they receive support in developing verification systems and the status of "low risk" country for EU importers operating under the obligation to exercise due diligence.

The EU-China Forest Law Enforcement and Governance (FLEG) conference held in Peking on 19-20 September 2007, which was co-organised by Germany and in which the new German CBFP Facilitation and other CBFP members took part, laid the foundation of the strategy developed during the German Facilitation for a joint dialogue with China in the Congo Basin. All five COMIFAC member countries considered as “forestry countries” are currently negotiating Voluntary Partnership Agreements (VPAs) with the European Commission under the EU Forest Law Enforcement, Governance and Trade (FLEGT) Action Plan (Cameroon and the Republic of the Congo: VPAs signed; Central African Republic has been negotiating since 2009, Gabon since March 2010 and the Democratic Republic of the Congo since October 2010). In the VPAs, the producer countries commit themselves to send only timber that can be proven to have been legally harvested to the EU or, as applicable, to other markets. In return, they receive support in developing verification systems and the status of "low risk" country for EU importers operating under the obligation to exercise due diligence.

However, the overall impact of VPAs on exports depends on the scope of the agreements signed. If tracking and legality assurance is required for all timber placed on the market, there will not be a two-tier export system: at the time of shipping, all shipments will receive legality assurance and those destined for the European Union will be FLEGT licensed. The definition and capacity of the tracking system to be put in place are crucial to ensuring that there is no longer a 'second market'. As has been emphasized by Mathieu BOUSQUET of the European Commission and Gregoire NKEOUA, Forest Director of the Republic of Congo during the FLEGT workshop with Chinese participation in Douala in March 2010: “This is a political will shared by the two negotiation parties and included so far in all VPAs negotiated by states with the European Union.” 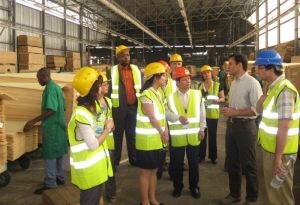 Secondly, COMIFAC is supporting the efforts of the private forestry sector, in particular the Inter-African Forest Industries Association (IFIA) and the Forest Stewardship Council (FSC), in developing regional forest certification standards and promoting the certification of sustainably operating enterprises. In the last few years almost five million hectares have been certified by the FSC as a result – a world record. It is hoped in this way to establish ‘ecologically sensitive’ markets for tropical timber. Intransparent practices of some companies are damaging the reputation of tropical timber as sustainable export commodity. Given the competitive pressures these practices could either, in a worst-case scenario, trigger a "race to the bottom" (non-sustainable management), or destroy environment-sensitive consumer markets. An open dialogue with the Chinese companies implemented in the Congo Basin, and the firm commitment pronounced by the Chinese administration to encourage these companies (most often subsidiaries to big Chinese companies) to respect sustainable forestry principles within their concessions promises to be the most fruitful strategy.

What has been accomplished?

1. Promotion of COMIFAC as the regional organization in charge of defining forest politics in Central Africa, and of CBFP’s potential as a multi-stakeholder dialogue platform in the Congo Basin. The Facilitation has presented the two sub-regional institutions during international conferences in China (IUCN/Forest Trends, Beijing 2009; International Symposium on Forests, Carbon and Water in response to climate change, Yunnan 2010) and in the context of direct consultations with Chinese government representatives in China and in the Congo Basin. Furthermore, CBFP outreach documents have been translated to Chinese (CBFP info flyer).

2. COMIFAC and China have taken up informal exchange meetings and are on the right way towards establishing official relations for regional cooperation in the forest sector. The German facilitation has invited Chinese delegations to CBFP’s plenary meetings, and has offered advice to COMIFAC’s presidency concerning the amendment of the Sino-African Forum (FOCAC) towards forest protection and sustainable management. The declaration of the last forum (November 2009) already calls for extended cooperation in the field of environment and climate protection, nevertheless the role of forests still needs to be specified. In the meantime, an informal entente has been concluded between COMIFAC and China’s forest administration representative to strengthen the dialogue in the forest sector in the context of the COMIFAC FLEGT workshop with participation from SFA in March 2010 in Douala. CBFP partners will continue to support these Sino-African initiatives.

3. Successful joint CBFP initiatives: some CBFP initiatives for streamlining the dialogue with Chinese actors go beyond simple coordination, and  constitute vital examples of CBFP partners’ capacity and willingness to work hand in hand for common objectives.

4. Continuous coordination between CBFP members in order to streamline the dialogue with China. Much inspired by its consultation mission in April 2009, the German facilitiation in submitted a road map outlining a common CBFP vision of how to implicate new actors, and providing a first overview of members’ activities directed at Chinese actors. Following this first coordination initiative, Germany worked together with those partners strongly involved in the China dialogue throughout its facilitation phase, and will continue to play a major role in fostering the relations with COMIFAC after its facilitation mandate. Please find below an overview presenting the major initiatives of CBFP members: