Characterization of a population of medium and large mammals in the Reserve Dja Wildlife: Potential and threats 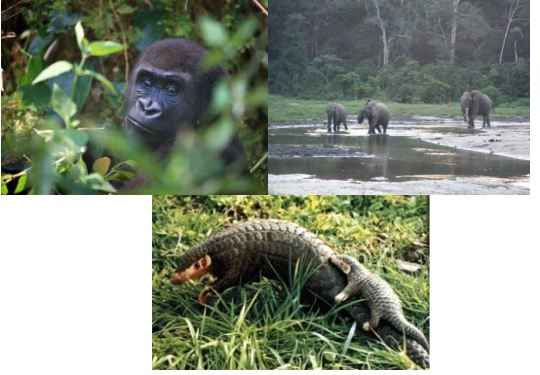 In order to contribute to the process of the management plan revision of Dja Biosphere Reserve, a diurnal mammal census has been carried out by the dja rangers under the supervision of IUCN from the 15th march to 6th June 2015. The main focus of this census concerned forest elephants, lowland western gorillas and chimpanzees.

An indirect survey based on a combined recce and line transect method has been used. Also for analysis, some bio statistical and GIS software have been put into contribution.

As main results of the study, roughly 17 mammal species have been identified. The artiodactyls constitute the main representative group. The densities of elephants, low land gorillas and chimpanzees have been estimated to 0,002, 0,030 and 0,029 giving a total number of 820, 15994 and 15100 individuals for the above species.

To reduce the impact of these treats, two recommendations have been formulated as follows: