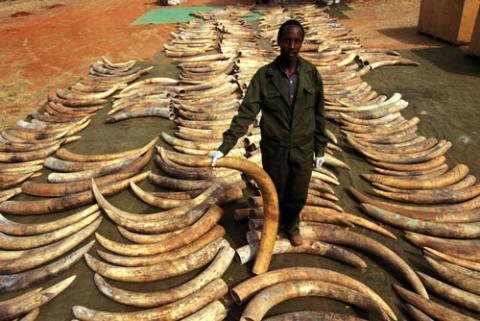 The alleged poacher, Madi Djougoudoum has been in custody since October 4, charged with the slaughter and destruction of protected species. The fight against poaching is intensifying in the eastern region. Following the seizure of close to 100 protected species in September, wildlife conservation officers have recently accomplished a feat. They recently took 29 tusks, representing fifteen elephants regardless of maturity, on October 4, 2013, in the Mambele village in the Moloundou subdivision, Boumba and Ngoko division. The booty seized weighed a total of 168 kilograms.

The ecoguards were barrier patrolling around the Lobéké park when they came across a vehicle bearing the number plate Es 784 AC, leaving Moloundou, allegedly belonging to a certain Madi Djougoudoum , born in 1975 in Guirvidig , in the Far North region. It is the spare wheel, sealed to the car by welding that tipped off the eco guards. When approached, Madi declared that he was carrying to two ivory tusks. And he explained that his second hand car always made him look suspicious. That  was enough for them to take him the Conservation Office’s garage where the welding was destroyed. On the spot, he offered an amicable settlement in exchange for a ransom. But the officers were unbending. The accused was compelled to declare the exact number of ivory tusks in his possession. "It was at this point in the garage that a search of the vehicle revealed a secret passage beneath the back seat that was covered and secured by screws, and contained 41 pieces of tusks” says Simon Peter Mpouop , Protection Unit Head at Lobeké park.

Madi then fully confessed to the deed. According to his statement, it was a friend of his former boss, who had asked him to transport the tusks out of Congo Brazzaville. He was allegedly promised 350,000 FCFA as payment once the mission was accomplished. He claimed to have received a down payment of 100,000 FCFA. "I left the Congo Brazzaville transiting through Moloundou , with the tusks, bound for Doubeyi on the Cameroon - Nigeria border , northern Cameroon , where I was supposed to leave the vehicle at the border, and meet Mr. Abubakar residing in Nigeria who would collect them for an unknown destination, " he said. He admitted that he has been conducting this activity for approximately six months. Madi was convicted of illegal killing of protected species, possession and illegal circulation of ivory tusks, which fall under Category A of fully protected species. This activity is prohibited under Article 78, 98, 101 of the Law no. 94 of 1 January 1994 to lay down the Forestry, Wildlife and Fisheries regime. The seized tusks were transferred and kept locked at the divisional delegation of Forestry and Wildlife of Boumba and Ngoko along with the vehicle. The suspect was taken into custody, to await trial in a Yokadouma court.