Ministers in close order adopted a series of tools for the harmonisation of the convergence Plan; they speak with one voice in preparation for final negotiations in Cancun. They adopted the Annual Work Plan (AWP), the 2011 budget, prepared Yaounde + 10 and signed three cooperation agreements relating to the creation and management of cross-border protected areas. 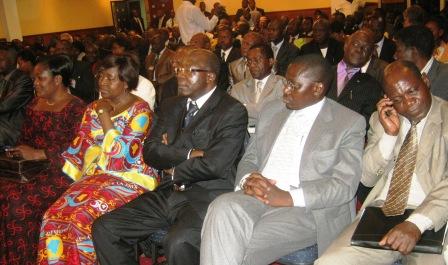 In his address at the opening ceremony, the CBFP Facilitator, Mr. Gaston Grenier, thanked COMIFAC outgoing President for success achieved during his term of office and expressed his satisfaction with the proposals made by experts during this conference and which are in line with the components of the CBFP Canadian facilitation roadmap. In his turn, His Excellency Emmanuel BIZOT, the CAR Minister of Forestry, Hunting and Fisheries, and COMIFAC outgoing serving President, recalled the actions which led his roadmap and presented the major achievements during his term of office. To close his speech, he passed on the torch of COMIFAC Presidency to the Democratic Republic of Congo.  In his address, His Excellency José ENDUNDO BONONGE, the new COMIFAC serving President, thanked his predecessor and acknowledged the scale of the challenges t 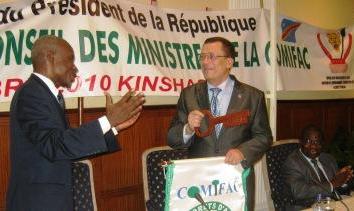 hat await him in his new responsibilities. He then presented COMIFAC as a family, and part of a large family and its exceptional potential, he added, make of the institution Africa’s catalyst in international negotiations. Minister ENDUNDO BONONGE ended by thanking partners for their constant support to the institution and its member countries. On his side, His Excellency Simon BULUPY, DRC Deputy Prime Minister, Minister of Posts, Telephones and Telecommunications, personal representative of the Prime Minister, in his opening address at the meeting, lauded COMIFAC long-term achievements and indicated he was persuaded that COMIFAC has enough potentialities to give impetus to social and economic dynamics in the sub-region. In conclusion, he placed his hope on this conference during which measures shall be adopted taking into consideration the situation of millions of people who depend on the Congo Basin. After these speeches and addresses, the DRC Deputy Prime Minister presided over the passing on of COMIFAC presidency to the Democratic Republic of Congo.

After the official opening ceremony, marked by these four striking moments, the ministers examined, in accordance with the agenda, 14 items, starting with “the Draft common position of COMIFAC countries at the 16th Conference of Parties to the Climate Convention" to the "Draft Declaration of Heads of States of COMIFAC Member countries concerning the adoption of the action plan for the implementation of laws on wildlife trade (2011 – 2016)”. After long discussions in com

mittees, the council adopted 15 resolutions including the Kinshasa Declaration on the common position of ministers in preparation of Cancun negotiations for a post Kyoto 2012 climate regime with changes. The ministers withdrew In camera in order to examine some items of the agenda namely: The situation of COMIFAC partner institutions in the sub-region: OAB, OCFSA; the planning of the 3rd Heads of State Summit on the Protection and Sustainable Management of Forest Ecosystems in Central Africa and the International Conference on Great Tropical Basins. At the end of the Council and in accordance with the provisions of the Treaty, the Ministers agreed that the next ordinary session of Ministers’ council shall hold in 2012 in the Republic of Chad on a date yet to be specified. They recommended an extraordinary Ministers Conference in April 2011 at a venue to be determined in agreement with COMIFAC.

During the council closing ceremony, the ministers signed cooperation agreements relating to the creation and the management of Mayumba-Conkouatti and Télé Lake-Tumba Lake bi-nationals, respectively between Congo and Gabon on the one hand, and Congo and DRC on the other hand. Also, the joint communiqué of the CTSA (Trinational Supervision and Arbitration Committe) of the TNS (Sangha Trinational) was signed by the three countries involved, namely Cameroon, Congo and CAR.