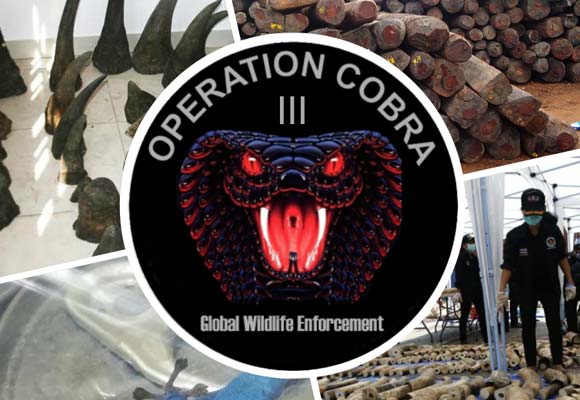 COBRA is a multi-regional wildlife law enforcement operation initiated by regional wildlife enforcement agencies/networks comprising Lusaka Agreement Task Force (LATF), ASEAN-WEN, South Asian Wildlife Enforcement Network (SA-WEN) as well as the USA, China and South Africa. The operation was inspired by the need to put into action commitments made by governments and the international community to address wildlife crime. Operation COBRA bridges source, transit and destination countries of wildlife contraband jointly to fight transnational organized wildlife crime. To date, three COBRA operations have successfully been carried out, in 2013, 2014 and 2015.

During the workshop’s opening session, Dr Adlehem Meru, Permanent Secretary of the Ministry of Natural Resources and Tourism of Tanzania stated that Operation COBRA was “a classic example of what effective interagency co-operation can yield in the region and beyond.”  He commended the COBRA initiative for the catalytic role it plays in bridging source, transit and destination countries of wildlife contraband specifically in combating wildlife trafficking which is a major threat to species' survival hence to economies and people’s livelihoods. He pointed out that the workshop was timely and reiterated the commitment of the Tanzanian Government steadfastly to enhance collaborative efforts in wildlife conservation in the region.

The workshop evaluated operation COBRA III outcomes in Africa and came up with strategies and concrete recommendations to be implemented by countries, organizers and supporting partners on the financial sustainability of the COBRA initiative, effective planning and execution of the operation, addressing of capacity and skill gaps and responding to emerging wildlife crime trends. The participants urged the organizers, co-ordinators and supporters of the COBRA initiative to explore long-term funding with governments and partners.

Mr Bonaventure Ebayi, Director LATF, took note of the success of Operation COBRA III which he attributed to the collective resolve and commitment of agencies working together, and stated that the COBRA initiative should be a model to be developed further. He reaffirmed that the initiative provides opportunities for building lasting relationships and collaboration for bolstering the war against illegal wildlife trade. He commended the workshop for developing a roadmap for the effective undertaking of similar operations in the future and called for increased support from governments and the international community to ensure sustainability of the initiative.

Mr Javier Montano, Regional Co-ordinator Wildlife and Forest Crime Programme - Eastern Africa for the United Nations Office on Drugs and Crime (UNODC), stated “UNODC recognizes the tremendous gains to be made in the fight against illicit trafficking in wildlife products from greater co-ordination and co-operation across national and regional boundaries. It is only in this way that the full extent of the networks involved can be exposed and dismantled. At UNODC’s Global Programme for Combatting Wildlife and Forest Crimes, and the International Consortium on Combating Wildlife Crime (ICCWC), we are encouraged by the exchanges during the workshop and its outcomes, which reflect the determination of all participant agencies to stamp out organized wildlife crime."

Ms Juniper Neill, Environment Director for USAID/Kenya and East Africa, thanked LATF for their leadership in organizing this important event, and emphasized that the US Government is committed to supporting the global fight against transnational wildlife crime. “Through our partnership with IUCN/TRAFFIC, we are pleased to continue our efforts to support country, regional and trans-continental action to stamp out wildlife trafficking which threatens the very survival of iconic species and the sustainable development of communities and countries who rely on wildlife based tourism as a significant percentage of economic growth.”