Conclusion of the Joint Meeting of the CBD Liaison Group on Bush meat and the CITES Central Africa Bushmeat Working Group is now available: HERE

From 7 to 10 June 2011 – The jointed meeting of the CBD’s bushmeat Liaison Group and the Convention on International Trade in Endangered Species of Wild Fauna and Flora’s (CITES) Central Africa Bushmeat Working Group held in Nairobi Nairobi (Kenya).

The purpose of the workshop, pursuant to Decision X/32 of the Conference of the Parties to the CBD, was to facilitate the implementation of the above decision, as well as to encourage and enable Parties and relevant inter-governmental and non-governmental organizations to take effective action to ensure the conservation and sustainable use of wildlife resources in tropical and sub-tropical forests. In others words, the aim of the meeting was to find solutions to what is widely regarded as one of the world’s greatest current biodiversity crisis—the over-exploitation of wild meat, also known as “bushmeat” for food.

The meeting was attended by over 20 governments, representatives of indigenous and local communities, and experts of international conservation and development organizations from Africa, Asia, America and Europe are meeting in Nairobi to find solutions to what is widely regarded as one of the world’s greatest current biodiversity crisis—the over-exploitation of wild meat, also known as “bushmeat” for food. 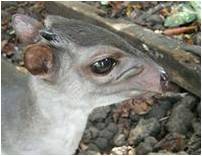 In conclusion, constructive discussions and concrete results confirmed the important contribution of the meeting which will be used to inform discussions at a forthcoming meeting of the CITES Standing Committee in August this year, as well as a November meeting of the CBD’s Subsidiary Body on Scientific, Technical and Technological Advice (SBSTTA).

“In Central Africa alone, it is estimated that over one million tones of bush meat are consumed each year, increasingly so in urban areas. Now, for the first time ever, the Secretariats of the Convention on Biological Diversity (CBD) and the Convention on International Trade in Endangered Species of Wild Fauna and Flora (CITES) have convened a joint experts meeting to address the “bushmeat crisis””.

The original source of the article is: TRAFFIC web site and the CBD website

Photo 1: Great ape meat on sale at the border between Gabon and the Republic of Congo Click photo to enlarge © TRAFFIC / Clement INKAMBA NKULUNairobi, Kenya, 10th June 2011—A growing and lucrative