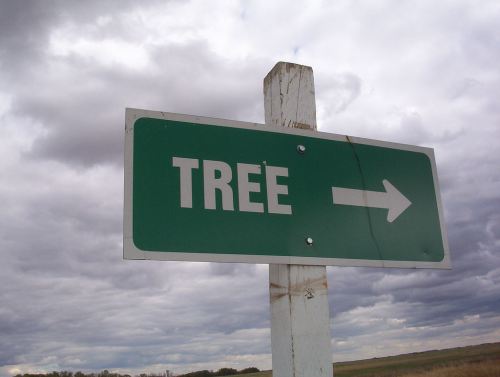 In your best John Cleese voice: “All right… all right… but apart from better sanitation and medicine and education and irrigation and public health and roads and a freshwater system and baths and public order… what have the Romans ever done for us?”

Monty Python’s famous skit from the movie “The Life of Brian” illuminates the fact that, despite the provision of all those goods and services, the Romans weren’t always an appreciated presence.

The same could be said for the world’s tropical forests.

While many people tacitly appreciate that forests and trees have some intrinsic and aesthetic value we, as scientists, have been pretty unsuccessful at convincing policy makers and big business that they are critical, not only to human well-being, but also to the global economy.

One would think the scientific evidence we have to hand would be sufficient to enable their protection and sustainable management. But it ain’t necessarily so.

THE BRIGHT SIDE OF FORESTS

Most of us are aware that many of our most important plant-based commodities originate from the tropical forests. Tea, coffee, cocoa, quinine, oil palm and others, all have very interesting, and often complicated development histories that have allowed the expansion of economic systems that, while based on somewhat exploitative colonial economies, have changed the very nature (often quite literally) of the very societies we inhabit.

Who knew, for example, that the island of Manhattan was actually ceded to the British by the Dutch in return for their monopolistic access to the nutmeg-rich spice islands of Indonesia, making them a European economic heavyweight in the 18th and 19th centuries?

Or that the planting in India of the enigmatic Cinchona tree, endemic to the highlands of Ecuador, would allow the European settlement of much of the Far East (for better or for worse) by providing a treatment for malaria with the medicine contained within its bark – quinine – saving many millions of lives in the process.

Or that the scrubby bush found only in isolated valleys of Ethiopia would yield the global coffee trade that feeds an industry for a product that many people, every day, seem incapable of functioning without?

Or that the bitter cacao of Latin America, a favorite of the British Elizabethan court, would fuel a chocolate indulgence shared by so many in the developed world?

However, as we have often seen, as soon as a forest product is commercialized, it is removed from the forest economy and can, in fact, lead to the destruction of its very source. The expansion of oil palm over the past twenty years is a classic example of global demand arguably leading to deforestation on a greater scale than many other commodities.

So, where does that leave those of us who are trying to make the case that forests, not only have a role to play in conservation, but also sustainable development?

BLESSED ARE THE RESEARCHERS

Recent research has revisited the paradigm that forests are extremely valuable for people – but with a much stronger evidence-base.

It is estimated that up to 1 billion people rely on forests in some way for their livelihoods and that women are often more reliant than men.

In many instances, rural households generate almost 30 percent of their income from forests. We know there is a significant correlation between access to forests and trees and dietary diversity, and therefore better nutrition.

We also know that the ecosystem services provided by forests are critical to modern-agriculture in terms of pollination, water and other services. We also know that forest play a major role in both climate change mitigation and adaptation.

But so what? This research has been well received in certain circles. It provides a useful, if not compelling, evidence-base as to the value of forests for local livelihoods, food security, poverty alleviation and climate change. And many of us are, rightly so, excited by that.

However, a question asked recently by a major donor when presenting this work made me think more about our overall mission. The question was: “… great research, but are you suggesting we keep people forest dependent?”

An interesting observation, and one that certainly requires some reflection on our own mission.

Basically, we should emphasize that we are talking about a much bigger picture.

Because yes, people who live closer to forests often have better diets than those who make that urban transition regardless of how much money they may have to hand.

Yes, the services provided by forests and trees support much of our global agricultural systems.

But the global trend towards achieving global food security has traditionally been based on clearing forests for agriculture regardless.

We possess considerable evidence that forests, and their services, touch all of us in some way. Important though it is that forest-based communities benefit from access to wild and cultivation fruits, vegetables and medicines, it doesn’t end there.

Your swig of coffee in the morning is dependent on forest-based pollinators, without which, your daily caffeine intake is going to cost you a lot more.