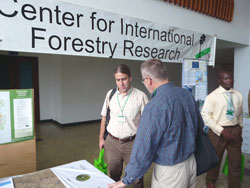 On November 10, 2009, was held in Yaoundé (Cameroun) the second forest day under the high patronage of the COMIFAC. Three hundred participants among which scientists, forest experts, communities, decision makers and other actors of the forest sector gathered at the Congresses Hall. This high level day was the regional action of what CIFOR intends to organize in Copenhagen in the light of the COP-15 supposed to replace the Kyoto Protocol. The main theme for this day was: "Forests of the Congo Basin and Climate Change: Achievements and Challenges ahead of Copenhagen" Around this topic, "Forest Day Central Africa 2" offered throughout the day a favourable, ideal and unique framework for many activities such as information markets, various interactive forums of participants in search of solutions to forest and climate change problems in Central Africa. Photograph - CIFOR Central Africa: Information Stands.

In her welcome address, Cyrie Sendashonga (Regional Coordinator, CIFOR-Central Africa) thanked participants for coming in numbers in response to CIFOR's invitation. She also welcomed everybody. She thanked more especially H.E. Elvis Ngolle Ngolle, the Cameroonian Minister of Forestry and Wildlife, for honouring this event with his presence and agreeing to chair its opening ceremony. She also thanked the COMIFAC Executive Secretariat for having accepted to cosponsor the initiative, not forgetting the PFBC German Facilitation for the multiform support given to CIFOR in organising this event. The Regional Coordinator drew attention on two emergencies which still need to be attended to within the framework of climate change, namely: (1) to continue to work on attenuation to reduce greenhouse gas emissions in the atmosphere; (2)   to promote adaptation activities as the current impacts of climate change will continue in the next decades due to what scientists call "inertia of the system". She went ahead to point out the outstanding role of forest in this dual answer approach; it is one of the few sectors concerned both by adaptation and attenuation. So, the forest is more than ever the in negotiations agenda at the Copenhagen conference and, for this reason, CIFOR was strongly determined to organise this 2nd edition of the Central Africa Forest Day. Moreover, she reassured participants on the transmission of recommendations issued at the end of this Day to CIFOR head office in view of their integration into the message of the event which will take place in Copenhagen. 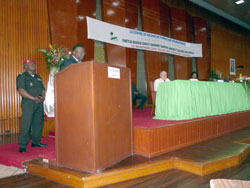 While reminding the Cameroonian government's commitment, without sparing any effort, to fight against the advancement of the desert, His Excellency, Elvis Ngolle Ngolle, the Cameroonian Minister of Forestry and Wildlife, in his opening speech, lay emphasis on the national forestation programme of which, in the light of the "Sahel Vert" initiative, will enable Cameroon to answer present at the international market of carbon in 2012.He also underlined the country's commitment with the European Union in negotiations for a Voluntary Partnership Agreement (APV) whose objective is to enable Cameroon to pursue and to develop "exportations of tropical timber to the European Union in a well defined legal framework". Although he mentioned these achievements, His Excellency, Elvis Ngolle Ngolle raised the existing difficulties yet to be solve in order to complete these projects for: (1) the conservation and sustainable management and exploitation of forest ecosystems in order to meet national, regional and world needs of present and future generations; (2) the improvement of the living conditions of populations in rural areas and; (3) the durability of the economic, ecological and social functions of Cameroon's forest ecosystems. Before he pronounced the solemn opening of the Day, the Minister expressed the wish to see that the various topics that were going to be discussed during this day supplement efforts towards the sustainable management of genetic inheritance and therefore contributing to the improvement of the process of climate change. Photograph on the right - CIFOR Central Africa: His Excellency, Elvis Ngolle Ngolle at the opening ceremony. 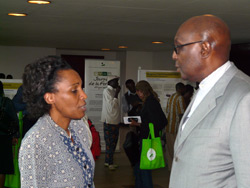 Throughout the Day, intense and fruitful discussions, participants displayed the obvious attachment of the countries of the Congo Basin to negotiations leading to the Copenhagen conference. This strong signal of the commitment level of actors in Central Africa for the REED had even been noticed on another occasion by Mrs Frances Seymour, Managing Director of CIFOR. Participants identified ways and means to implement in order to reduce greenhouse gas emissions on the one hand and to adapt to the current persisting situation on the other hand. Furthermore, participants examined ways and means likely to help to reduce the destruction speed of this reserve. The issue was also to encourage public authorities to take measures towards logging companies, especially Western partners whose countries are reluctant to sign this protocol, as well as local populations on the helpfulness of the forest to the environment. Let us note with Dr. Simon Lewis, following her address reported by La Nouvelle Expression that "the medium size of trees in tropical rainforests is increasing, as they capture more carbon from the atmosphere and slow down climate change". Photograph on the left - CIFOR Central Africa: Mrs. Cyrie Sendashonga, CIFOR and Mr Roger Tsoungui, CEEAC. 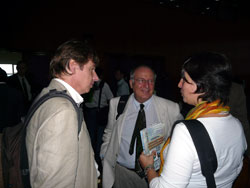 During the closing ceremony of the Day, PFBC facilitator, Mr Hans Schipulle recalled the role of the PFBC which is to support central African countries in the implementation of the convergence Plan which is the operational translation of the Declaration of Yaounde. As for international negotiations process on the global measures to take against climate change, he laid emphasis on the position of PFBC. Thus, for PFBC, its members must assist COMIFAC in developing a political and technical capacity equal to negotiations to be carried out within the framework of international dialogue on forest and the environment and more specially under the REDD process and the fight against the climate change. In order to attract and invite all PFBC partners for this purpose, the Facilitator formulated four actions to be undertaken or consolidate, namely: (1) To bring their support to technical preparations at national level, by putting in place pilot activities and developing technical, scientific and organisational capabilities for all actors; (2) To bring substantial support to the climate work group; (3) To help new initiatives to get connected to COMIFAC; (4) To contribute to raising "climate" issues among national political priorities. In own way of insurance, Mr Hans Schipule stated the availability of PFBC to see central African countries through in the development and the reinforcement of a documented joint position. Photograph on the right - CIFOR Central Africa: Discussion between Hans Schipule, PFBC Facilitator and some of the participants. 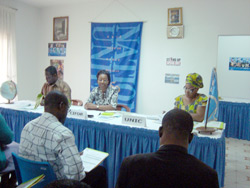 The day before the forest day in Cameroun, i.e. November 9, 2009, a press conference was held by CIFOR with the UN Information Centre at Tsinga. Some experts gathered with Mrs Cyrie Sendashonga, regional coordinator used this opportunity to recall to journalists the need for disseminating among the public, the various resolutions which African leaders implement in order to go "in closed order" and make their voice to be heard at the Copenhagen Summit next December. According to "Le Jour", a daily, taking into consideration the lack of commitment from some industrialized countries for the fight against climate change, some observers are worried about the ability of Africa to make her voice heard. Photograph on the left - CIFOR Central Africa: Briefing de la presse. From left to right Dr Denis Sonwa, CIFOR, Mrs. Cyrie Sendashonga, CIFOR and Mrs. Anne Nsang, UNIC

For more details, view the Forest Day's documentation (in French).