What is the economic and social value of the forest sector in the Congo Basin: the case of Cameroon? 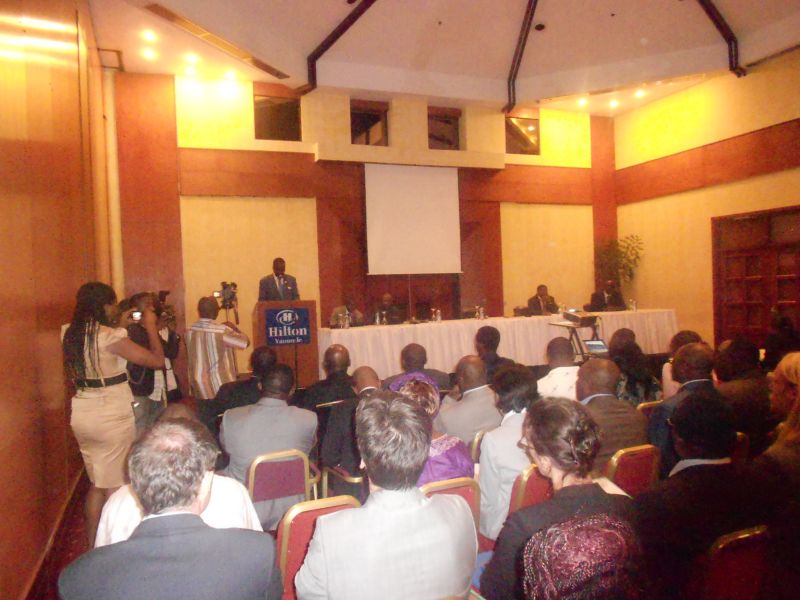 The answer to this question was the focus of a study conducted by the Center for International Forestry research (CIFOR). It aimed to: “assess the economic and social value of forest and wildlife resource management and exploitation as well as the fallouts expected from environmental services at local and national levels in Cameroon”. More specifically, the purpose was to: (1) evaluate the direct and indirect benefits to the national economy generated  by the forest/wildlife subsector and compare them with those derived from other rural subsectors (2) determine the contribution of the forest/wildlife subsector to the national economy based on macroeconomic indicators (3) measure the subsector’s  impact on employment (formal and informal sectors); (4) evaluate the tax-related and economic losses accruing from illegal practices observed in the area of forest and wildlife exploitation; (5)  gauge the potential economic benefits arising from innovative financing mechanisms (notably REDD+) and ecotourism (6) evaluate the other social and cultural benefits delivered by the subsector; and (7) develop a model evaluation matrix to assess the contribution of the forest/wildlife subsector to the economy of Central African States based on the pilot study of Cameroon.

The results of this highly interesting study, gathered about 150 people, representing the Prime Minister’s Office, sectoral Ministries, research institutions, diplomatic missions, development agencies and civil society organizations around a restitution workshop held on July 30, 2013, at the Yaounde Hilton Hotel. Led by the Ministry of Forestry and Wildlife of Cameroon (MINFOF), the workshop aimed to present the results of the study to participants and collect their comments to beef up the document. The workshop saw three main highlights:

Opening ceremony chaired by the Secretary General (SG) of MINFOF, representing the Cameroon Minister of Forests and Wildlife

In his opening address, the MINFOF SG, Dr Dénis KOULAGNA redefined the context and rationale that prompted the study. According to the SG, the sector’s economic and social value had never been assessed before. For a long time, the contribution of this sector had never been comprehensively taken into account in the national economy. Further on in his statement, he pointed out that the results of this study would be an invaluable tool in developing forest sector policies, given its economic and social perspective and considering that the contribution of the forestry sector, had hitherto always been viewed from the taxation angle.

The opening of the workshop by the SG, gave way for participants to listen to a series of presentations on the study. 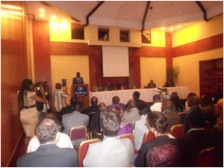 ♦ Firstly, Dr Richard Eba’a, CIFOR Regional Coordinator took to the stage to present the methodology of the study. It is based on four key components, namely:

(1) macro-economic analysis of the forest / wildlife, mining and agricultural sub-sectors based on national accounts aggregates;

(2) Identification of economic and financial benefits from the forest / wildlife subsectors;

Dr. Eb'a highlighted the difficulties the team faced on three major levels of access to data. Firstly, there is a serious issue of data collection and archiving in public administrations: the data either disappear with time or are inconsistent in terms of information sources (between departments or between centralized and devolved services). Secondly, many officials clearly withhold information, despite the letter of support issued by the Minister for this study. Finally, the vast majority of private operators refused to provide, even on promise of confidentiality, estimates of their turnover, profit margins or operating costs.

♦ Taking the floor next, Mr Jean Pascal Nkou, a Consultant, focused his presentation on The forest sector’s contribution to Cameroon's economy. He elaborated on the topic by presenting the following points: Its contribution to macroeconomic indicators, the interrelation between the forest sector and the rest of the economy (intermediate consumption trends of the sector, use of forest products in other sectors), Comparison of revenues channeled to State budget allocations and Simulation of a few impacts of economic policies.

At this point, some crucial information was brought to the participants’ attention, namely:

a. The forest sector’s value added has consistently accounted for 2.7% of total value added (GDP) between 2008 and 2010. This contribution exceeds that of the non-oil mining sector (0.18% of GDP in 2010) and is lower than that agricultural sector. This first comparison does not reflect the true potential of each sector given that during the period under review, the agricultural sector received more resources than other sectors.

c. 73% of forest sector products are used for intermediate consumption by other sectors as against 44% and 17% for the mining and agricultural sectors respectively

d. Out of the total amount of wages paid by the Agricultural, Mining and Forest sectors in 2010, the forest sector paid 69.20%.

e. Given that forestry is a growing field, it offers development opportunities for Cameroon should she move to secondary and tertiary wood processing and better exploitation of non-timber forest products.

f. An estimate of  benefits from the adoption of new financing mechanisms and promotion of ecotourism was carried out: (1) development of Cameroon forest products - an increase in demand for final consumption  to the tune of 100 GFCFA, global wealth created represents 66.6% of total additional production of the sector. (2) forest and wildlife products are used in the economy for an additional $ 100 GFCFA, production will increase to 154 GFCFA and actual wealth created will total 81 GFCFA or 52.59% of production.

c. A Simulation underlines the fact that Mount Kilimanjaro receives an average 35,000 visitors per year as against a little less than 2000 for Mount Cameroon. In addition a visitor pays between 995 Euros and 1,100 Euros, equivalent to an average of 720,000 FCFA in Tanzania against only 63,500 FCFA in Cameroon according to MCEO. All calculations considered, Mount Kilimanjaro provides foreign exchange reserves of close to 25 billion CFA francs per year in Tanzania not including the tourists’ hotel expenses, souvenir shopping, etc.. Cameroon rakes in only about 127 million from the Chariot of the Gods (Mount Cameroon).

♦ A thematic analysis of the forest-wildlife sector

Following the thread of presentations on the forest sector’s contribution to the economy, the papers that followed Mr. Nkou’s presentation, made a thematic analysis of the forest-wildlife sector.

It appears from these presentations that these themes of the forest-wildlife sector contribute as follows:

b. 496 billion Francs/year to value added,

Furthermore, it is apparent that these different themes significantly impact other sectors such as the tourism industry.

After the presentations, the participants were quick to react, as contributions focused on the appropriateness of the methodology used to obtain these results and on the systems put in place to get reliable statistics.

Recommendations made during the plenary session, were captured by MINFOF and will be used to develop a roadmap. They comprise mainly post-study recommendations:

These recommendations brought the workshop to a close with the Minister of forests and wildlife expressing satisfaction and the wish to see the report produced and made available to the public.

To gain a better understanding of the context of this study, it is necessary to refer to the preceding negotiations. In order to place this study in "context", it is needful to refer back to the advocacy action conducted under the Canadian CBFP Facilitation by former CBFP Facilitation partners which sought to promote a self-financing mechanism of COMIFAC. This advocacy led the Head of the Diplomatic Mission of Former CBFP Facilitator countries to meet the Congo Basin's Ministers of Finances and Head of Government as well, because the Minsitries in charge of forests and the environment needed to have adequate resources. Given that this kind of management has cross-border implications, it was equally key that governments in the sub region should shoulder their responsibilities with respect to COMIFAC.

One of the outcomes of discussions with the Ministers of Finance and Prime Ministers was the decision to ease production of comparative data on the economic and social areas of the forest and wildlife sector to contrast with other areas of economic and social life. This could ultimately make the case for increased investment in the forest sector. The Canadian Facilitation team, realizing the need to produce such data had then developed terms of reference for a study on the economic and social value of forest resource and wildlife management and exploitation, and the benefits expected from environmental services at local and national level in each Congo Basin country- Bilateral trade between the Canadian CBFP Facilitation and the choice of Cameroon for the launching of this study proved worthwhile for two reasons: (1) to host the study and serve as the first case study and (2) provide funding for the study.

The final report will be available very soon.