CEEAC: The 14th Summit of Heads of State and Government Consolidates and give Security to COMIFAC! 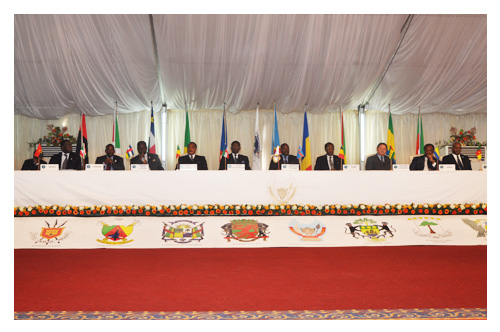 His Excellency Kabila, President of the DRC and President of the organization since 2007, recalled in his opening speech the holding of the Conference of the Ministers of the Forests, Environment and Plan in Kinshasa in order to release the joint position of Central Africa on climate changes.  While joining himself to this position, he insisted and exhorted his collaborators to "close up" and speak "the same voice" during the Summit on Climate changes in December both in Copenhagen and in all the other international meetings relating to the reduction of greenhouse gases emissions. Moreover, he underlined after having outlined the headlines of his mandate, that it is urgent to strengthen the economic integration of the sub region. Earlier, the Secretary General of CEEAC, Mr. Louis SYLVAIN-GOMA, expressed his gratitude in his welcome speech to all the Heads of State and of Government for their support to the integration process of Central Africa.

At the end of intensive and fruitful sessions, participants to the conference rejoiced for the efforts made for the mobilization of the consequent financial resources. With regard to climate change, they congratulated themselves for the development of a joint position of Central Africa, resulting from Council of CEEAC-COMIFAC Ministers. According to the final communiqué, the conference encouraged the Heads of State and Government to cease the occasion offered by the Copenhagen conference for advocacy for this joint position. At 41 days before the United Nation Summit on Climate, Central Africa, through its higher institution has commissioned" current President of CEEAC to transmit this joint position to the African Union and to ensure of its integration in the joint position of the Continent." In addition, the CEEAC expressed its serious concern with regard to the threat of the progressive disappearance of Lake Chad. Participants therefore committed themselves " to make all the required efforts to reverse this tendency" as it can be read in the communiqué read  by the Congolese Minister for the International Regional Cooperation of DRC and current President of the Council of Ministers of the sub region, his Excellency Raymond Tshibanda.

The Heads of State also analyzed measures to be defined for the resolution of the fundamental issue of adequate financing of the regional integration of which survival and future of COMIFAC depends on as sub regional institution. To highlight the emergency of this situation, its Excellence Raymond Tshibanda had already activated the alarms during the launching of preliminary workshops in October 17, 2009 saying: "But, given that we are in the process of organizing ourselves, let us start  giving an indication of greater credibility. We feel that our partners are responding more and more positively and their reply must, of course, be supported by our own contributions". He insisted in the final declaration read at the end of ministers' workshops on the contribution which each State must bring: "We are conscious, you and me, that with this intention, we must absolutely and urgently address a fundamental issue of adequate financing". Knowing the very low level of CCI implementation and its negative effect on the integration process, the conference invited Member States which did not do it yet, to include as soon as possible, the CCI mechanism in their national legal corpora and informed their Ministers of Finance, Budget and Governors of the Central/ National banks to hold as soon as possible an extraordinary meeting for the implementation of CCI.

The Presidency of CEEAC was finally entrusted to his Excellency ldriss DEBY ITNO, President of the Republic of Chad where the 15th ordinary Summit will be held in 2010.

The final communiqué (in French)

Opening Speech of his Excellency Joseph Kabila KABANGE, President of the Democratic Republic of Congo and current President of CEEAC (in French)