From 12 to 14 March 2013, the African Model Forest Network (AMFN) organized at the Yaounde Conference Center, in Cameroon, the African Model Forest Conference (AMFC).  The theme chosen for this first AMFC-2013 was: « Emerging Africa: Governance and Change, Innovation and Green Social Business". The aim was to establish a framework where Africans could meet and discuss the issue of emergence in Africa in the next 30 years. The AMFC included: Magisterial conferences, workshops and interactive exchange platforms, debates/motions, coffee table and exhibition of Africa-engineered and invented products. 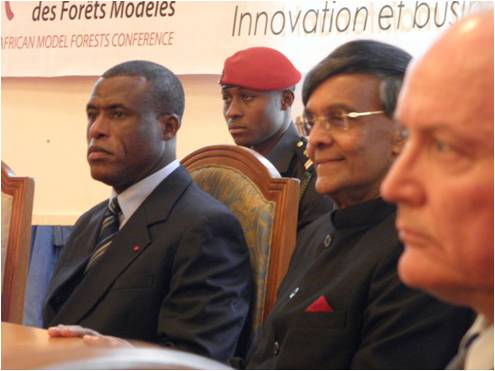 The AMFN received the financial support of Ressource Naturelles Canada (RNCan) and the Canadian International Development Agency (CIDA). An inter-ministerial committee was established by Cameroon Prime Minister's Office to help the AMFN team to organize this conference. Various other material and human forms of support were provided by national, regional and international partners.

Official representatives of the governments of the Republic of Cameroon, the Central African Republic, the Republic of Congo, the DRC, Rwanda, in charge of the Protection of Nature, Trade, Sustainable Development and related issues; COMIFAC; the International Organization of the Francophonie; the International Model Forest Network; the Ibero-American Model Forest Network; the African Model forest Network, partners, as well as civil society organizations and opinion leaders from over the world, were also present. 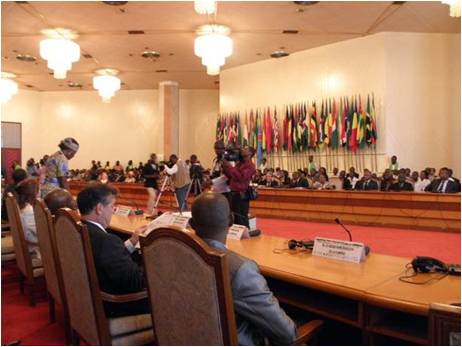 Three Days to Exchange and Share Experience on Africa’s Future

During three days, the AMFC 2013 was an opportunity to discuss and carry out a thorough evaluation of the transformational assets of African rural and urban landscapes. Several themes enabled attending experts to exchange with participants on the future of Africa. Among other topics:

♦ Climate change issues with regard to African Model Forests

♦ Sustainable development or emergence: When experts reflect on the future of Africa

♦ Sustainable development as a requirement to viable emergence: From words to actions

♦ From good governance to emergence: When entrepreneurship is no longer a secret

♦ Concerning the efficiency of COMIFAC’s policies for sustainability and entrepreneurship

♦ Solutions to the issue of Decentralization and Industrialization in the forestry sector: Model territory management experiences

♦ The 3rd industrial revolution and Africa: The governance and innovations we need

♦ The relevance of rethinking agriculture and feeding today 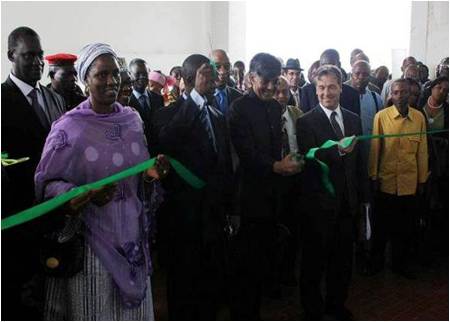 First AMFC exhibition or CAFM-Expo played a vital role. It was created with the aim to boost the development of local entrepreneurship and its connection to the resources it needs to move forward. It was a platform for rural entrepreneurs to showcase their achievements, to share their experiences in view of creating and improving quality. It was also an occasion for people to meet at different moments to exchange ways and tools for a better transformation of resources into sustainable productions, to network and benefit from the advantages of biodiversity.

CAFM-Expo 2013 edition enabled exhibitors to establish partnerships. It was the ideal platform for exhibitors to showcase their products and services, to promote actions undertaken to protect the environment and nature, to encourage development of businesses and sustainable investments in rural areas. It was also an opportunity to gain desired visibility and acknowledgement for African and world Model Forests, international organizations, research institutions, rural entrepreneurs, investors, craftspeople and ministries. 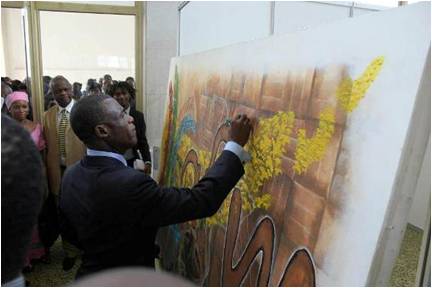 An interactive platform, gave room to entrepreneurship to express itself. This space was supported by the Micaïa Foundation of Zimbabwe, AGRO-PME of Cameroon, Training, an NGO from the Republic of Congo and the Female Entrepreneurs Network of the African Model Forests. This was covered by Radio Environnement throughout the African Model Forest Conference, with the following main objectives:

-       To showcase the participation of all the exhibitors at the conference through live interviews and discussions over the radio, live exhibition stand animations on the Entrepreneur Tribune.

-       To ensure media coverage of partners meetings in the debate program while facilitating meetings.

During the three-day conference, the activities of this tribune revolved around three main points:

♦ Exhibitors marketing, interview platforms and direct discussions of exhibitors and a program every morning,

♦ A guest at the midday news

♦ The networking of partners, such as the Female Entrepreneurs’ Network of African Model Forests with Dawood Al Shezawi, representative of the Minister of Foreign Trade of the United Arab Emirates at the AMFC, CEO of strategic.Marketing.Exhibition/AMFN Partner

Exchanges concerned the best experiences in African Model Forests as a whole, which the AMFN intends to use to stimulate its innovation and emergence program at local level:

♦ The Female Entrepreneurs’ Network of African Model Forests under establishment: Women are one of the most dynamic groups committed to the success of Model Forests. Since 2012, women from all Model Forests under construction in the Congo Basin, including the women of the Maghreb Model Forests (Algeria, Tunisia and Morocco) have decided to join their efforts and initiatives under a network. This is a groundbreaking experience in the context of Model Forests as a whole.  Through this network, MF women want to share their experiences in the valorization of NTFPs, including Allamblackia (experience of Cameroonian women), bamboo (Experience of Rwandan women) and moringa (experience of Congolese women). They want to set up a plate-form for the valorization of female knowledge and know-how for the creation of viable and sustainable enterprises that can help to alleviate poverty in rural areas and to preserve resources, and to ensure the emergence of rural women.

♦ FOMOD pens of hope made of wood residues. The PM could not hold his admiration as he received one of them as a gift (with CAFM engraved on it) and its containing box. He encouraged such initiatives which put together local operators and the private sector.

♦ Honey valorization by MICAIA Foundation of Mozambique. MIACAIA’s approach is innovative and is based on a down-to-earth principle: Learning and managing together, with local communities. The Foundation handles issues such as food security in the poorest areas of Mozambique through social entrepreneurship. It manages income-generating ecotourism and honey projects, ensuring quality and marketing services in national town markets. MICAIA Foundation innovates in that it is a mixed structure made up of the Foundation on the one hand, and of social entrepreneurship on the other hand; the first helps to raise funds while the latter helps to establish a participatory management system involving the concerned communities. MICAIA’s approach develops many other sectors as one of its strategies to alleviate poverty is to diversify income sources in order to increase homes' resources.

♦ The Samba Food project in Ghana, an enterprise dealing in the production and marketing of peppered sauces in the sub-region and at international level. Like any enterprise, Samba Food has been through tough times but solutions were found to the problems encountered. Today, Samba Food is a reference in Ghana, in Africa, and in America where these products are marketed.

At the end of the AMFC, the participants expressed their gratitude to Cameroon's and Canada’s Governments, as well as to the OIF, for their various forms of support. The Yaounde Declaration was also prepared and adopted by the participants summarizing the major resolutions resulted from three days of exchange, dialogue, consultation, networking… in search of solutions to the African model of emergence