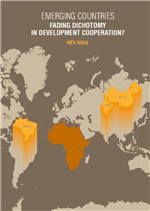 "The major changes in the field of development cooperation begun in the last decade as a result of the economic emergence of some countries. Attention is given to the increasing economic role of China, India and Brazil in Africa over the last ten/twelve years, a role that provides them with the opportunity to project their power in a different region, which in turn boosts their image more like developed countries.

The emergence of these countries has the potential to structurally transform the prevailing traditional dichotomy since the end of the Second World War, between developed and developing countries in the framework of development cooperation."