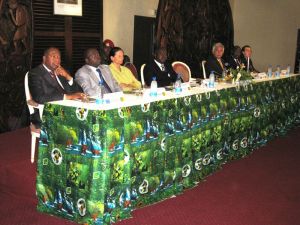 The Voluntary Partnership Agreement - FLEGT between the European Community and the Republic of Cameroon to boost the sustainable management in Cameroon tropical rain forests.

Yaounde (Cameroon), May 6th, 2010 - Cameroon signed the Voluntary Partnership Agreement - “Forest Law Enforcement, Governance and Trade (FLEGT)” (APV FLEGT) with the European Union (EU). This will make it possible from now on to continue and to develop forestry in Cameroon. The bilateral agreement aims to improve forest governance and ensure that the wood exported into the EU has complied with the legal requirements of the Republic of Cameroon. The conclusion of the negotiations’ ceremony brought together many personalities namely: the Ambassador representing the EU in Cameroun; the Minister of Forests and Fauna, the Minister of Trade of Cameroon, other government officials, the Ambassador representing Cameroon in the EU, Members of the Diplomatic Corps represented in Cameroon, the COMIFAC representatives, the technical negotiations commission, international and civic society organizations representatives.

Cameroon and the EU started the negotiations of this agreement since September 2007. Since the first day of negotiations, the Cameroonian part has really gained from important and specific technical support of the German International Technical Co-operation through their “International Forest Policy” Program (IFP) and Support Program to the implementation of the Forest Environment Sector Programme (ProPSFE). The conclusion of the negotiations in Cameroon is the third Voluntary Partnership Agreement FLEGT signed by the EU in the world, after that of Ghana (September 2008) and the Republic of Congo (May 2009). Moreover, this agreement is the second signed by a country of the Congo Basin- World's largest contiguous tropical rain forest after Amazonia - A biodiversity hot spots of important concern for the world and giant carbon stock. 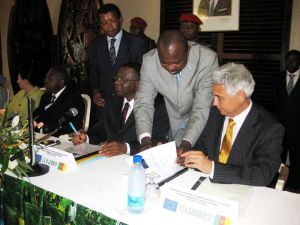 With the Signature of the FLEGT Voluntary Partnership Agreement, Cameroon undertakes the commitment at eradicating the illegal exploitation and associated trade out of its supply chain - a practice which now generates forest degradation, opens up tracks to poachers, gives place to corruption in the sector, and implies significant losses in state incomes. Indeed, within the framework of FLEGT, that all timber, forest products and derivatives exported from Cameroon into the European market must from now on, have a Certificate of Legal Origin which enables customers to trace timber throughout the supply chain.

On its side, the EU commits itself to support the capacity building of the national actors in timber and wood products traceability (from the forest to the port). By ensuring appropriate and systematic compliance and enforcement of regulation, the implementation of FLEGT measures would significantly contribute to sustainable forest resources management in Cameroon - second wood producer in central Africa after Gabon. Moreover, effective monitoring systems of wood production and commercialization would give to the government the possibility to maximize the economic growth of the forest sector - accounting for 6% of the Cameroonian GDP and being the second source of revenue after oil. The introduction of transparency mechanisms envisaged by the FLEGT agreement would generate improvements in the Cameroun’s forest sector governance. FLEGT negotiation process - the opening of debates on “well-functioning wood sector” to the civil society has already strongly contributed to the reform formulation - was necessary to put Cameroon on the track of wood industrial exploitation and more sustainability – thus will increase the forestry sector impact on poverty reduction. 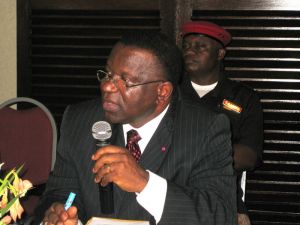 The Minister of Forests and Fauna, S.E. Elvis Ngolle Ngolle underlined in his welcoming speech that: "We are convinced that with the FLEGT - whose immediate benefit will be the reinforcement of the governance and tax profits - the forest sector will reinforce its position of third in the economic sector".

Since the preparation phase of negotiation, the German Cooperation accompanied Cameroon in the process through the German Embassy in Yaounde, the GTZ Advisor affected at European Commission Delegation, and the GTZ Advisors based in the Ministry in charge of the forests. The pioneer Cameroun role in the agreement negotiation on criteria for tropical wood export into the EU is also to be congratulated. In this respect Cameroon should be seen as model to other countries engaged in the process.

The signature of the agreement is not the final outcome but an important step forward: today begins the difficult FLEGT agreement implementation and the introduction of measure ensuring the effective stop of the illegal wood exploitation in Cameroon.

In press (in french): 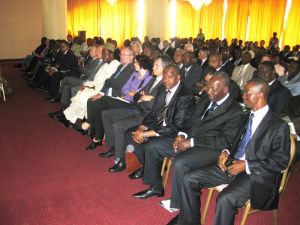