The main innovative outcomes of the Facilitation and partners were shared and the future orientations for COMIFAC, CBFP, COMIFAC working groups and CEFDHAC adopted.

Please download the major conclusions of the RAC: HERE and the full documentation: HERE 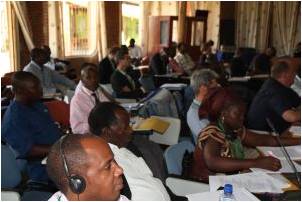 Bujumbura, 26-27 May 2011 (photo by Athanase Karayenga and Martin Normandeau)– The 9th Congo Basin Forest Partnership (CBFP) Regional Advisory Committee (RAC) met in Bujumbura on 26 and 27 May 2011 under the coordination of the CBFP Facilitator and the patronage of His Excellency Jean Marie Nibirantije, Minister of Water, Environment, Planning and Urban Affairs  (MEEATU) of the Republic of Burundi.

This CBFP meeting was preceded by the MNV Regional Project validation workshops (23 and 24 May) and the REDD+ workshop (25 May 2011) and was chaired by the CBFP Facilitator, Mr Gaston Grenier. It was an opportunity for CBFP partners to exchange views on progress on the implementation of the CBFP Facilitation Roadmap: from Kinshasa to Bujumbura and also on emerging and innovative outcomes from partners supporting the implementation of the COMIFAC Convergence plan directions and the Facilitation roadmap. 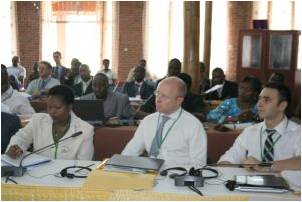 Special emphasis on the revitalization of COMIFAC, CBFP, Working Groups and CEFDHAC.

This meeting then examined the issues of a synergy of action within COMIFAC Working Groups and within CEFDHAC in implementing the Convergence plan: from September 2010 to May 2011 ; the sustainability of contributions and reforms of institutions in Central Africa; and lastly a strategic reflection on COMIFAC, CBFP, working groups and CEFDHAC. 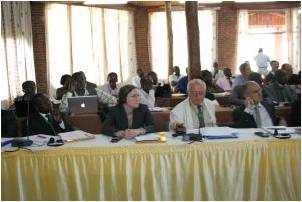 After two days of intensive and fruitful discussions, delegates at the 9th CBFP Regional Advisory Committee came up with strong recommendations based on the plenary sessions and the working groups –

Please download the major RAC conclusions and recommendations on the link below: HERE

No work without play

Apart from the meeting programme itself, delegates were taken on three activities:

Offered by the Host country and CBFP Facilitation, delegates actively took part in a Cocktail dinner with cultural events, at the Bujumbura Safari Gate hotel, on Wednesday 25 May 2011.

During the evening, delegates were entertained by resounding traditional drums and a sublime tune. Also prominent were Burundi cultural traditional dance groups providing lots of fun, relaxation and entertainment to CBFP RAC delegates.

♦ Cocktail offered by His Excellency Jean LAMY at the résidence de France in Burundi.

In partnership with His Excellency Jean Marie Nibirantije, Minister of Water, Environment, Planning and Urban Affairs (MEEATU) of the Republic of Burundi, the French Ambassador to Burundi, His Excellency Jean LAMY kindly invited CBFP RAC delegates to a Cocktail at his residence on Thursday 26 May 2011. Apart from RAC delegates, Ambassadors of ex CBFP Facilitator countries, CBFP partners represented in Burundi, representatives of the departments of culture and tourism were invited. One of the highlights of this ceremony was the Film on Burundi showing the country’s rich fauna and flora, its landscapes and its cultural diversity.

RAC delegates took part in an excursion, a guided field trip – on the theme: “Forests – People” in the Ruzisi Natural Reserve (RNR) at the mouth of the Rusizi river in Lake Tanganyika. It is an exceptional biodiversity reserve and is one of the five important zones for bird conservation in Burundi. With a surface area of over 5000 ha, the RNR has two sectors: the Palm Groove sector and the Delta sector formed by the Rusizi river, Lake Tanganyika and the lagoon.

Delegates had the opportunity to visit one of the two sectors of the reserve:

(1) The Ruzisi Palm Groove which is a natural Area of exceptional value due to the fact that it has a concentration of fake palm trees (Hyphaene benguellensis); this is a  species that is native to the lower Rusizi plain.

(2) The Delta, a Ramsar site, home to an exceptional biodiversity : 193 plant species, 18 mammal species, 17 reptile species, 17 amphibians, but also 120 to 130 bird species, of which 92 are migrant. These visits gave participants firsthand experience of Partnerships in park management and of the link between forest and water, dry forests, ecotourism, energy woods, cross-border management.