Washington DC, Oct.22 2015 -  The 49th session of the Global Environment Facility (GEF) Council wrapped up today with the reappointment of Naoko Ishii as the GEF CEO and Chairperson for a second four-year term. The Council emphasized Ms. Ishii's strong leadership in advancing a reform agenda for GEF-6, preparing the GEF2020 strategy, delivering a record replenishment, as well as her dedication to improving the GEF partnership.

The Council also gave the green light to a new work program that puts a strong emphasis on tackling climate change. The meeting, which opened in Washington DC on October 20, approved a work program to provide financing for 17 new projects and 2 programmatic approaches focusing mainly on climate change and sustainable ecosystem management in the Amazon.

In anticipation of the upcoming Paris climate talks, COP21, it emphasizes action on climate, as well as an integrated, multi-country program for the Amazon. 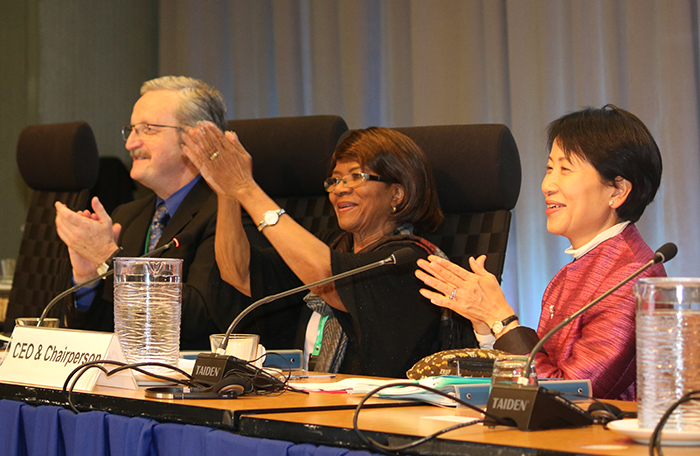 The work program totals US$233.67 million for new projects and programs from the US$4.43 billion replenishment that began in July 2014, and covers energy efficiency investments, emissions reductions through land management, technology transfer and renewable energy promotion.

The proposed projects will more directly engage key actors and stakeholders to deliver practical, effective and long-term solutions. Potential emissions reductions are estimated at 498 million tons of CO2 and up to 73.45 million hectares of landscapes and seascapes will be conserved.

Addressing the Council earlier in the week, Richard Kinley, UNFCCC Deputy Executive Secretary said, "Climate finance is a critical element for the Paris package. In fact, there will be no Paris Agreement without credible outcomes on finance in the UNFCCC process proper and in the sister processes."

Noting that showcasing GEF actions in developing countries will help to strengthen confidence that finance is flowing, Kinley also urged increased support for adaptation, especially in the context of the Least Developed Countries Fund (LDCF) and the Special Climate Change Fund (SCCF), two funds hosted by the Global Environment Facility (GEF) that focus on adaptation support for the most vulnerable countries.

In her opening remarks to the 19th meeting of the LDCF/SCCF Council today, Naoki Ishii said, "With just six weeks to go until Paris, it is clear that adaptation will be at the core of the new agreement. Success in adaptation relies fundamentally on effective international cooperation, exchange and support."

"The GEF stands ready to play an important role in supporting enhanced, ambitious action on adaptation. Our early projects provide much-needed guidance on how this can be achieved," Ishii said. "With nearly US$1.3bn in funding approvals towards nearly 130 countries, our adaptation program is expected to directly reduce the vulnerability of more than 17 million people; while helping 70 countries integrate climate risks into their policy-making and planning processes."

During the three-day GEF Council meeting there was also a strategic discussion on the future direction on accreditation, an update on the preparation of the integrated approach pilots, and the presentation of a new report from the Scientific and Technical Advisory Panel on reducing black carbon to save lives and combat climate change.